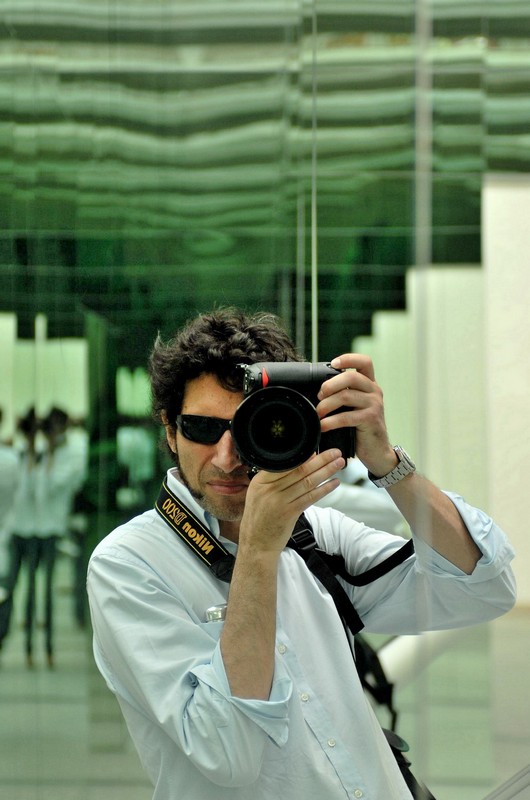 Quotes:
“Curiosity is the soul of fantasy … in the photograph the fleeting moment is inherent.”

“I am looking for the unusual … I like discovering facts and things never seen or noticed before, making me help from my Heart, everything comes naturally … spontaneously” Ugo Maria Cionfrini Artist

Ugo Maria Cionfrini currently lives in Rome where he is a graduate of the Liceo Artistico secondary school system in Italy which is devoted to the study of art and art history. At the age of eleven, he entered the world of photography with his trusty American Kodak by taking pictures obliquely to create a suggestive perspective while at the same time to enclose in it a more extended image.

In middle school at the experimental school De Coubertin in Rome, Ugo also took a keen interest in black and white printing. As Ugo’s interest in art took on a more serious tone, he added his second name, Maria, to his art pseudonym, Ugo Maria Cionfrini.

From 2004, Hugo entered the art market by creating his own exhibitions so that he could share his discoveries — which are inherent in nature and also in everyday life — with the entire world.

From October 2005 to May 2006, he attended the Professional Photography Course “From the Basics to the Digital” offered by Nikon Italy at the photo agency VISION Via Lazzaro Spallanzani 11 – 00161 Rome. At the same time, he participated in the Macro Course offered by photographer Riccardo POLINI.

In June 2007, he took part in a photography course in Camargue (Southern France) that was organized by Nikon with photographer Guido BISSATTINI.
Artwork published in La Differenza (“The Difference”), a monthly culture magazine.
Issue: Year 1 Number 21b (May 28, 2008). Remembering games – one of Hugo’s photographs showcasing Katharina TRABERT.

In 2008, Hugo created a nature calendar for his 50th birthday. Later on in October of the same year, the Italian travel magazine, “DOVE“, publishes a photograph of him for an advertisement.

Also in 2008, he donates his photography entitled “The Mallard … while he takes flight”, taken from the collection of “Zampilli di … Vita“, for a charity evening that took place at the headquarters of the Knights of the Order of Malta. The event’s proceeds were donated to the non-profit organization, Peter Pan. (See Il Messaggero September 26, 2008, p. 49).

In 2009, Hugo attends a four-month course at the Roman School of Photography located in Via degli Ausoni, 7 which later moved to Via Giosuè Borsi, 18, but now currently resides at Via di Pietralata, 157 Rome.

In 2009 – Santino: Maria Mater Dei “O Viveiro” Chitima The Mozambique image offered by the Great Mother of God Parish – Rome, blessed by the Holy Father Benedict XVI on 7 October 2009, feast of the Blessed Virgin Mary of the Rosary.

In 2010, Realizes the calendar “The Great Mother Parish of God is Missionary” with inside two of his photographs of the Holy Father Benedict XVI.

In 2011 – Realizes a photo shoot for Carla Baldini ( Vox Mundi ) Magliano in Toscana.

In 2011 – Realizes a photo shoot for the bathroom “Il Gabbiano Azzurro” by Marina di Grosseto.

“Ugo Maria Cionfrini is best known for his pioneering work in capturing animated figures in a jet of water. He is considered the first artist to discover that, in the water, a person can see figures of various shapes, such as animals (cobras, elephants, koala, bear, hound, baboon, frog etc.) and people (Ballerina).”