This exhibition instinctively conceived by the photographer – Artist Ugo Maria Cionfrini who was supposed toexhibit his photographic works in a solo show, asked the curator Marco Ghisoni to be able to exhibit together with a painter who could interact with his paintings with his own works photographic to make the participants feel that it is possible to paint both with a brush and with the camera (He does not manipulate anything because he considers himself to be pure) is inspired above all by Nature, leaving his Heart free which is his great and only Muse. The painter Paola … “SURPRISE” investigates situations and moods that she interprets by experimenting techniques and materials that arouse particular interest in her.

for the World Water Day March 22nd and month of photography until March 31, 2019

“almost halfway through the page.”

with ten of my Gushes of … Life

The NeoartGallery curated by Dr. Giorgio BERTOZZI and, the art historian Ferdan YUSUFI.

Artists will be present:

2016 – Quintessenze
– Tivoli Scuderie Piazza Garibaldi. The NeoartGallery curated by Dr. Giorgio BERTOZZI, Giancarlo CANEVA and art historian Ferdan YUSUFI
The catalog of the exhibition, edited by Giorgio MONDADORI, (group exhibition) from 17 to 25 September.
http://www.neoartgallery.it/pdf/quintessenze-tivoli-2016/
on page 40 and 41 there are my two works: “Miraculous … 50s” and “T-Rex …” one of my ” Zampilli of … Life “.

The photograph titled: ” Balls … bowling ” was misinterpreted by a judge who told me via email that it was a trivial photo and did not want to make controversy but, He did not understand that they were not really two bowling balls but … two simple grapes, in my opinion if you do not have a sensitive soul on some things there is little to do they do not get there.

The NeoartGallery curated by Giorgio BERTOZZI and art historian Ferdan YUSUFI, (group exhibition) from 18 to 20 March.http://euroexpoart.com/artisti/ugo-maria-cionfrini/

I participated in law by being among the first three, in the first biennial of contemporary art of facebook in the photography category. (With the “Microphone … years ’50” – 120 cm x 80 cm on aluminum with frame in the back) 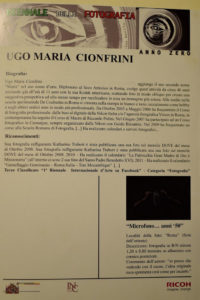 Trusting a black and white with strong contrasts is the evocative feature of this shot … the “Microphone … 50s” as well as being a tribute to the past, is a happy technical insight that fixes the subject on black textures Almost as if he emerged from memory to share his instant memory. The imaginative find of staring at what you see, to make even more visible, confirms the bizarre and imaginative universe of Ugo Maria CIONFRINI’s photography. – Rosanna MELE (art historian)

December 21, 2014 I decided to unveil the “secret” of my last discovery, inherent in nature. “Everything Flows…” is a part of the horse, a superb, elegant animal, somewhat crazy as me and fantastic in all its glory. (Exactly sweat under the saddle, after a gallop ride)

From a joke of her friend Selena, to take a tour of her work, she decided to do a traveling exhibition for the city of Rome starting for a few close friends from her home, and secondly for the general public through SanSaba22 a rib would go to Grottaferrata and finally in the Talenti area in Rome.

We have guests – photography: life pushes.
by Guest Author • 17 February 2014

My friend Beppe Zezza – in truth he is a friend of my mother, a question of registry office – he is my admirer. He registered me among the recipients of the newsletter “La Lampadina” and I have been stopping for months asking me to write an article that describes my artistic inspiration. “La Lampadina” – he says, and I must recognize with reason – always dedicates a space to art and therefore is a suitable place. ”

But talking about oneself is difficult for an artist: what drives him is an inner “fire” but he speaks with the tones that “he feels” inevitably risks appearing “over the top”!

For the friendship with Beppe, I try.

Who am I ? A photographer. A photographer and a curious person. For this innate curiosity, when free from the (hard) commitments that life imposes for the need to put together bread and something more, I have always turned with the Reflex to fix environments, colors, characters that struck my imagination.

One day I found myself in front of a fountain and I started looking at the gush of water – jets of life – musodilevriero was a “strange” fact: my attention was attracted by the colors that were playing around to him and I felt like a voice, coming from the “same” who called me. So I took the Reflex, I mounted the tripod and started shooting. The gush was no longer an inert matter but a living creature that took on new and fantastic aspects from time to time. An amazing and exciting thing …

The technology of photography has made it possible for me to transpose the emotions I felt in an “objective” way and allowed me to put them in common and transmit them. Great is my satisfaction when, in the numerous exhibitions in which I exposed the best of my shots, I see in the eyes of the visitors the same amazement that I felt and I feel.

My hope (or illusion?) Is that attitude of curiosity about life and its hidden aspects that distinguishes me and that is the soul of my work can be transfused into the viewer.

Here are some comments that visitors have affixed to the exhibitions, in the visitors book: “I have found what your eye has seen and reinterpreted for those who cannot see!” “In the thousandth of a second is enclosed forever the form “of nature”. “Only the very attentive eye is able to perceive what the common eye cannot even see”.

At my next show you are all invited! To look..and comment…

debuted in a show, projected on a big screen during Marco PASSIGLIA’s show “Between me … Tenco and Gaber” in THE SHADOW OF THE COLOSSEUM, June 22nd. 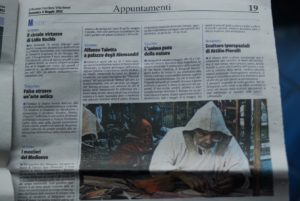 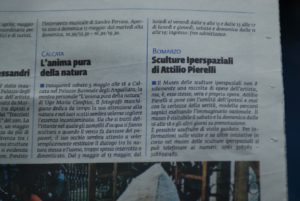 Editorial THE COUNTRY OF GROSSETO Sunday, May 6, 2012. 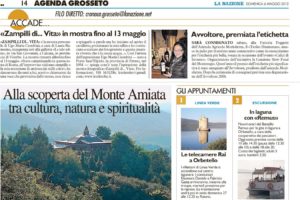 Article by Giuliana SANZANI – He publicly wanted to thank Dr. Giuliana SANZANI for the interview because he wrote by thread and sign what I told her, not omitting anything, an ethics to admire in this Italy that in ancient times could boast To have among its fellow citizens so many people of great value, the greatest of all was certainly Leonardo by VINCI, thanking you warmly for his exquisite professionalism, cordially the greeting, Ugo Maria CIONFRINI.

Jets water is figures in movement
.
On Saturday, May 5, two exhibitions of Ugo Maria Cionfrini will be inaugurated in Calcata (VT)
Artistic photographer, with a professionally high-profile path behind it. Her
Peculiarity is to photograph jets of water through which, with his
Fantasy and a play of lights natural, Animates and interprets shapes, figures, objects,
Animals and moving characters, employing only 1/125 seconds.

The “Zampilli di vita” exhibition will open at 5 pm
The Le Tele Tolte gallery in the street
St. John 49, while “The pure soul of nature” will be inaugurated at 18am
Baronale Anguillara Palace in Piazza Vittorio Emanuele II, 4. Both, ad
Free admission, will be open until May 13th.

Com And where the idea of interpreting it, so differently, is that
Do we all see it as simple clutches? (Somewhere I read that she does
Reference to an area of Rome)

Answer: I was walking in this “area of Rome, imp
I looked back in front of a with this Zampillo and my attention was drawn
Of the thousand colors dancing around him, I heard myself calling from a voice that came from “the same”
not I can explain it to words but I started to open the stand, position my
reflex camera and I started taking frames to this “living” creature that is
The water itself. At every normal shot, 1/125, I felt something inside me,
every so I looked through the viewer and could see something surprising
tooth, this zampillo It seemed to have a soul, since 2009 I have not gone to
find it …

It can explain why 2 exhibitions at Calcata and at the same time?

Answer: … I soon said I had this opportunity being invited both
From the Councilor to Culture both from the gallery and since I liked the idea for me

and I have to say many people are curious about this idea as you are and it is
This is what I wanted to create “curiosity” (MY GREAT DISEASE, LA
CURIOSITY A MY FRIEND A DAY I DO NOT KNOW IT NEVER KNOWN
MY LIFE IS A MAN CURIOUS) and I like to make people curse and make them
To talk about strange things that are normal to me To others are out of the ordinary,
FOR ME ALL IT IS EASY BY VIRGOLETTE WHY I’VE ALL WITH THE MAXIMUM SPONTANEOUS ‘WHO IS CONTRADDISTING, I WILL BE ALWAYS SAME AND IT IS NOT EASY IN THIS WORLD, SOME HAPPY HAD OUT OF THE FACT THAT ARE AN ARTIST.
THANK YOU VERY MUCH!
Calcata, medieval village in the province of Viterbo in the valley of Treja, perched on
Of a cliff, is about 46 km from the bridge of Milvio bridge (along Cassia Bis)
And we recommend it as an interesting day trip.
Giuliana SANZANI 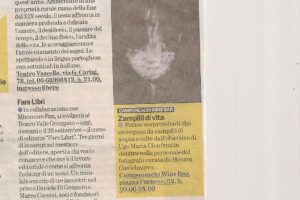