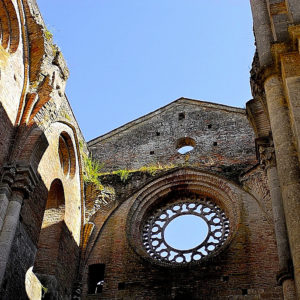 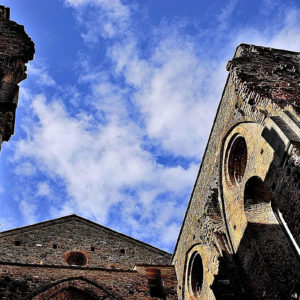 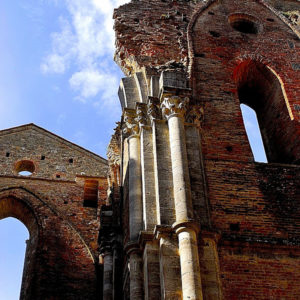 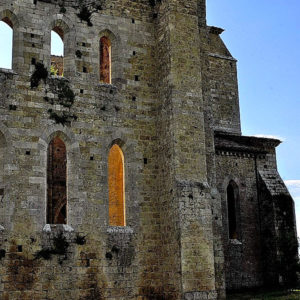 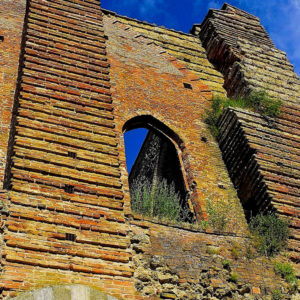 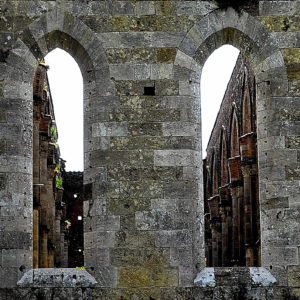 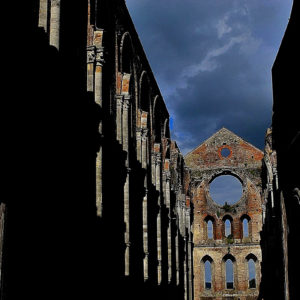 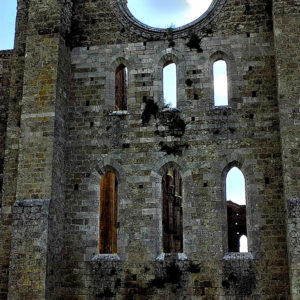 The abbey of San Galgano is a Cistercian abbey, about thirty kilometers from Siena, in Chiusdino.

The site is made up of the hermitage (known as “Rotondi di Montesiepi”) and the large abbey, now completely ruined and reduced to the only walls, a tourist destination. The lack of the roof – highlighting the articulation of the architectural structure – is the abbey of the Melrose, Kelso and Jedburg abodes in Scotland, Tintern in Wales, Cashel in Ireland, Eldena in Germany, Beauport Paimpol (Brittany) and Convento do Carmo in Lisbon.

Of St. Galgano, who is the owner of the place that is celebrated on December 3, is known to have died in 1181 and who converted after a disorderly youth retired to hermitic life to be subject to penitence, with the same intensity as before debauchery.

The culminating moment of conversion took place on Christmas Day 1180 when Galgano, on the Montesiepi hill, entered his sword into the ground to transform the weapon into a cross; In fact in the Roundabout there is a boulder whose slits emerge from an elk and a segment of a corroded sword from the years and rust, now protected by a plexiglass teak. The obvious echo of Arturian myth has not failed to raise curiosity and, of course, some bold hypothesis about possible relationships between the mythology of the Round Table and the story of the holy Chiusdinese.

In many biographies of San Galgano, including the Vita Sancti Galgani de Senis, he refers to the contacts that the saint had with the hermitage of San Guglielmo di Malavalle (Castiglione della Pescaia in the province of Grosseto). There are many affinities between the two characters: both riders, both decided to vote for the hermitic life by abandoning the earthly militia, both of which have links to Arturian matter. San Galgano pours his sword into the rock, with a similar gesture, but inversely to that of Arthur who takes it out. Guglielmo, according to an ancient folk tradition in certain localities in the area (Castiglione della Pescaia, Tirli, Buriano, Vetulonia) would in fact be William of Aquitaine, Eleonora’s father, whose court was Chrétien de Troyes, author of Le Roman de Perceval ou Count Grail, in which the Holy Grail appears for the first time. William X Aquitaine died in 1137 as he was on a pilgrimage to Santiago de Compostela but no one ever saw his body. He left eldest daughter of Eleonora his vast domain. It may be the saint of Malavalle that appears in Maremma some years after these facts. For the first time, it is mentioned in Vita S. Guilelmi written after 1210. The results of scientific investigations carried out on St. Gallus relics, including that of mitochondrial DNA, make the character’s Nordic origin very likely. [2]