“Curiosity is the soul of the imagination … the fleeting moment goes with photography.”

“He is looking for the unusual … likes to discover facts and things never seen or noticed before, getting help from his heart, everything comes naturally … spontaneously his style takes him from Pictorialism … He doesn’t manipulate photography but uses his * inseparable twin * (camera) as a brush “ Ugo Maria Cionfrini

He is a photographer, a chef, a stylist and a sculptor. His greatest ally is his heart, * of him MUSA for Excellence. *

Ugo Cionfrini, adds his middle name Maria to his art pseudonym Ugo Maria Cionfrini. (in the registry office his father had him inserted as * Ugo Maria * being born in a small town, perhaps they put the comma because the employee of the municipality thought the name Maria was strange for a child or something like that).

graduated from the Liceo Artistico via Ripetta, he began photographing with his American Kodak at the age of eleven, taking pictures obliquely to create a suggestive perspective and at the same time to enclose a more extensive image. In middle school, at the De Coubertin experimental school in Rome, he also tried his hand at black and white printing.

In 2000 he made his first shirt (created by his heart in 1990) by inserting on a JEANS shirt all the parts cut like a square of his old shirts where the figures were embroidered, making it a “Shirt with a thousand figures” 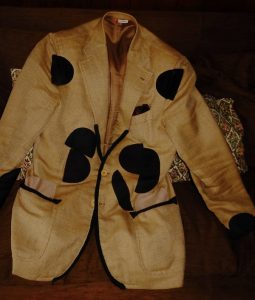 or his jackets with a thousand patchescreated in 2014

In 2004 he began to enter the art market by making exhibitions, to make the whole world participate in his discoveries inherent in nature and also in everyday life. The merit was of the architect Beatrice PALMA who proposed him to do a solo exhibition in his architectural studio *** WANTS TO THANK YOU ENDLESSLY FOR GIVING YOU THIS OPPORTUNITY ***

which he strangely he had never thought of … surely also bewildered by the loss of his Great father and guide.

From October 2005 to May 2006 he attended the professional photography course “From the basics to digital” of Nikon Italy at the VISION photo agency Via Lazzaro Spallanzani 11 – 00161 Rome and, at the same time, attended the Macro course by photographer Riccardo POLINI.

In June 2007 he took part in a photographic course in Camargue, organized by Nikon with the photographer

In 2008 – Creates a calendar on nature for its fifty years and in the same year, in October, the monthly DOVE publishes a photograph of him for an advertisement.

Also in 2008 he donated his photograph entitled “Mallard … while it takes off”, taken from the collection of “Gushes of … Life”, for a charity evening whose proceeds go to the non-profit association PETER PAN,

the event took place in the headquarters of the Knights of the Order of Malta.

In 2009 – He attended a four-month course at the ROMAN SCHOOL of PHOTOGRAPHY in via degli Ausoni, 7 now moved to via Giosuè Borsi, 18, now moved to Via di Pietralata, 157 Rome

In 2011 – Realizes a photo shoot for Carla Baldini (Vox Mundi) Magliano in Toscana.

In 2011 – Realizes a photo shoot for the bathroom “Il Gabbiano Azzurro”(in 2020 his restaurant https://www.ilgabbianotrepuntozero.it/ “Gabbiano 3.0” has 1 Michelin star) in Marina di Grosseto.

“Ugo Maria Cionfrini is best known for his pioneering work in capturing animated figures inside a gush of water. He is considered the first artist to discover that, in water, a person can see figures of various shapes, such as animals (cobras, elephants, etc) and people (Dancer). “

the images contained in this site are protected by copyright, any type of use is prohibited unless authorized in writing by the author who owns the rights. The total or partial reproduction, even if it shows the watermark or if the author is indicated, will be followed by the issue of an invoice and the subsequent request for payment in accordance with the law, the prohibition is also extended to sharing on social media (Facebook , Instagram, Linkedin etc.).